Things seem very slow at the moment. Though progress of sorts is being made.

I lost a kilo this week. Which is fantastic, because I was having a bit of a plateau and it is good to be finally losing again.

I have finished hand quilting the quilt to go to England. This afternoon I sewed one side of the binding on, now I just have to slip stitch the back down. Once I have finished I will hopefully have time to do something with some of my other blocks.

I am now up to 25 places I have never been before, and the most exciting thing of all, is I picked up all my travel documents from the travel agent this week. Now I just need to get some foreign currency and I’m set to go. Only 2 weeks and a few days left to go now, and I am starting to feel distinctly unorganised. Mostly I think it is because I think that I should have more to do before going on a six-week trip when in fact there is very little you actually need to do.

As usual, not a lot going on here. Things are ticking along. Almost finished the hand quilting.

I have realised that I am quite a bit behind on a few of my goals, particularly the writing and the making blocks into things. However, I am determined not to stress about it till after I get back from holidays. By then I should hopefully have knocked over a good portion of my goal on ‘going 100 places I’ve never been’ and then I can focus on the others.

I did manage one new place today, entirely on the spur of the moment. I have had my parents staying and we were over at the hardware store at Springfield. When we were finished there we decided to go to the shopping centre for lunch. I was pointing out local landmarks, and said that behind the shopping centre was the Robelle Domain (it’s a park). I knew it was there because I had read about them wanting to do stage 2 in the paper. So we decided to go have lunch at the kiosk there instead. So we were wandering round and there I am thinking that it’s a pity I don’t have my camera so I can take some photos for the blog, when I realised I could take photos with my phone. Ironically, when I got home and emptied out my bag I realised that my camera had been in there all along. However, here are the photos of the Robelle Domain taken on the phone. I don’t think they turned out too bad.

I broke my no chocolate till I go on holiday vow today. It wasn’t that I was really craving chocolate or anything, I just completely forgot that I was doing the no chocolate thing. In someways that is encouraging. It means I’m not obsessing about chocolate. In other ways it’s slightly discouraging because most of my unhealthy food habits are not about will power, but all about not paying attention. However, am determined not to let this be the start of a landslide. My intention of breaking some bad habits before I go on holidays is still a good one, and one lapse does not a bad habit make. Plus I now know what I have to work on.

Everything just feels a little bit blah, at the moment. Not sure why. Possibly stress at work, not helped by the rumours circulating about job losses. Getting sacked doesn’t really bother me – except for the worry about how I would pay my mortgage – but not knowing does. If you know you can make a plan, and get on with things. Not knowing leaves you in limbo. I don’t know, it could just be because I am so close to going on holidays, but not so close enough that I need to pack, and I can really feel excited about it.

Things are plodding along nicely here. Except for my slight hiccup with Telstra. In their infinite wisdom they have decided that, despite having let me do it the last five times, I am not allowed to recharge my mobile broadband with my credit card online. Though I will give them credit, the nice man on the phone did give me 250MB of credit to tide me over until I can either get to a shop to buy a voucher, or the case manager calls me back to reactivate credit card payment.

I am making good progress on the quilt to take with me to the UK. I already have 1 border quilted – only three more to go, and then the binding and I will have something finished. I am still not really happy with the back, which has gone a bit pinched, but as my Dad said, who’s going to look at the back. Well, other than me, that is. It’s really not that bad, and I am probably over reacting. There have been worse quilted quilts in history anyway.

I did receive a bit of new stash in the mail. I know – I have to stop spending so much money. However, I like to think about it as an investment in achieving my goals. How am I going to finish making something from all 1000 blocks if I don’t have any fabric for backing and sashing? 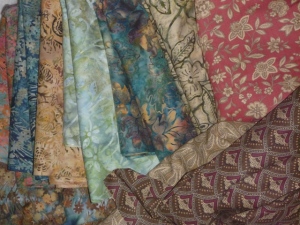 Life is pretty boring here at the moment. I have been plodding along with the hand quilting, and a little bit of machine sewing on a new quilt top.

I have been trying to read a bit more and have just finished reading a rather interesting book by Michael J Sandel. It was about the ethics around genetic enhancement, gene therapy and stem cell research. Not a topic I had really thought about much before so it was an interesting read. I thought it was particularly interesting that one of his arguments against was that it was dis-empowering to attempt to change our selves to fit the world, rather than build a world to suit us as we are. My initial reaction was to reject that idea from an environmental standpoint, but I think he was talking more about culture and society. If anyone can change themselves to fit what society thinks of as acceptable, where is the incentive to build a society which is accepting of difference?

Which takes me nicely I guess to the topic of judging people and hubris, of which I had a rather splendid moment this week.

We got an email at work asking people to participate in Dry July, a campaign where people pledge not to drink alcohol for 1 month in order to raise money for people with cancer. So I am reading this, as a non-drinker, thinking how silly it was that people think it is a challenge to go without alcohol for a whole month, when really it shouldn’t be. Hence, todays topic about judging, and the excessive pride that usually goes with it when you think that you are better than the people whom you are judging. My hubris didn’t last long of course. I quickly remembered that my last effort to go without something that I enjoyed, chocolate and cola, lasted a spectacular 12 hours.

Being my usual rash and impulsive self, I then decided what I really needed to do was give up chocolate and cola for a month, just to prove that I could. I’m not generally in favour of giving foods up. Usually, it works about as well as dieting. You last a little while and then you splurge. However, a month isn’t a permanent fixture and since it will take me nicely up to the start of my holiday gives me a good opportunity to rid myself of some bad habits, so I am not constantly craving caffeine and sugar while I travel. Then when I get back I will reintroduce the cola and chocolate as treats, rather than as everyday occurrences.

On an entirely separate matter, I have decided to start making my own bread. Don’t ask why. Another one of my rash decisions. There is a picture of my first effort below. It was slightly lopsided, a fact I am going to blame on my oven not heating up evenly and not the fact that I didn’t knead it enough or add salt, because I didn’t have any. Other than that, it actually tastes alright. A little stodgy, but beautiful toasted with a drizzle of honey.

Anyway, enough from me for one day. 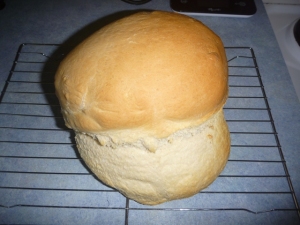