I am feeling very unproductive. I had a long list of things I wanted to do today and I haven’t done any of them. I have instead been curled up under a quilt reading a book. The last week has seen the first real cold spell of the year. I have taken to wearing socks in the house. It’s not just cold, but cold and rainy, with a grey, grey sky. It’s hard to feel motivated when the weather is like this. All I want to do is curl up somewhere warm, sleep and eat chocolate.

In a fit of madness I decided that the way to get motivated to sew was to get all my blocks out of the cupboard and have them sitting around my sewing room. It means I have a very messy sewing room but it seems to be working. I have finished a quilt top, and am part way through finishing another. Plus I have ideas galore for what I can do with the rest of them. Every time I am in the room and look at the piles I start thinking about which ones go with each other and new ideas for putting them together. 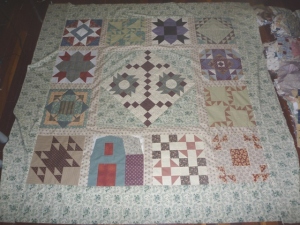 I am feeling the need to do a bit of philosophising today. Mostly because yesterday I went to the handmade expo. I was thinking I’ve never been to a handmade expo before so I can count it on my list of “Places I’ve never been before”. Then, as I was wondering round, I started thinking – this is exactly the same place they held the garden expo. So does it really count as going somewhere I’ve never been before? Which got me thinking about the nature of place and whether an event could be a place. I’m still tossing up about this, but a part of me is inclined to say they were different places. If I told you I had been to the Bundamba Turf Club (the venue) twice this year it would be true, but it wouldn’t be the whole truth, it wouldn’t be the same as saying I went to the garden expo and the handmade expo.

In the end I decided to count it, not because I had resolved the what is a place question, but because I thought it met the spirit of my challenge. The aim was to get me out more, and it did. It also had the added benefit of this… 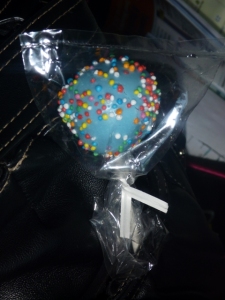 It’s a cake pop. A round bit of cake covered in some kind of icing and then put on a stick. It was actually really good cake too. Nice and moist.

Places I’ve never been before – 12

BMI – no change, cake pop being the least of my worries from the last week, but I am resolved to start the new week freshly motivated.

Novel: 8635 words. I have a suspicion that it might be going backwards, mostly because I decided to change the point of view and so I am going through what I have written and changing it, which has meant taking some bits out that no longer made sense. But I have some good ideas for what happens next based on the new point of view.

Quilt blocks : yes, I have actually made something. I have come to the conclusion that barring miracles there is no way that I was actually going to get the big quilt hand quilted by August in time for the birthday party, so I decided I needed to make some new quilt tops and pick one to machine quilt.

So here is my first effort. It’s actually bigger than it looks because each of the blocks is 20 inches. 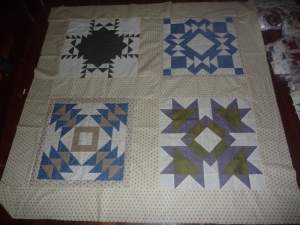 Now I just need to get through my current malaise (which I suspect might be caffeine withdrawal) and make a couple more.

I’ve finally got something finished. Hooray. Okay so it was only a cushion, but that is better than nothing.

I also wrapped some art canvases with some fabric that I painted a while back. After painting it I liked it, but decided it was too stiff to put in a quilt, but they work well on the wall. 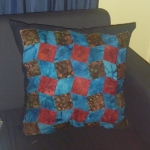 I have got to that part of a Sunday afternoon where I usually start to feel restless and kind of antsy. That feeling when there is nothing you really feel a pressing need to do, but you really want to be doing something, just not any of the things on your to do list. Am also trying quite strenuously to resist the urge to pig out on chocolate just because it is Easter.

I have been feeling a lot of late like I haven’t really been accomplishing anything. So this morning I did a bit of a stock take of the goals and I am not actually doing that badly.

Healthy BMI – going well, lost another kilo this week. If I keep this up I should be a healthy weight for my height well before the end of the year

100 places I’ve never been before – Yesterday I went to number 10 – Spring Mountain. Pictures below. While I am a little bit behind on this one I am not too worried because I know my trip in August is going to rack the tally up really fast.

Make things from all my 100 blocks – now this one isn’t going so well. As a matter of fact it is going atrociously. Not helped by the fact that at the moment I am machine quilting the pink quilt I made the other day, and machine quilting, I have decided, has to be on my list of my worst things to do.  That and hand quilting the big quilt is taking up a lot of my time. But I will be positive and say that I am making progress. I did buy two lots of Queen size batting at the Spotlight sale yesterday, that has to count as some kind of progress.

This sign at the start of the walk was a little disconcerting, but I decided to proceed with caution

Most of the walk was this lovely, open forest

With loads of these rocky outcrops

The track circled round this big one

and on the way back I saw the weirdest thing…

this long line of caterpillars, all crawling along nose to tail.

I finally got out of the house and went somewhere – The Flinders-Goolman conservation estate (pictures below). It was quite a nice spot with a lovely picnic and barbecue area and some walks with just the right amount of length for a morning. It was almost deserted though. There was no one there when I got there, and only 2 extra cars by the time I left.

So where does the imagination in the title come into it?  I had my brochure.  Looked at it and picked a walk, thinking it might be nice to have a nice stroll to a look out point. Yet despite the information at hand, when imagining this walk I completely failed to imagine that in order to get to anywhere worth looking out from I might have to walk up some hills. Just when I started to think my imagination might be seriously broken I started to have some very good imaginings on the subject of ticks.

So why is it that I can imagine ticks but not hills? Maybe it is some ancient evolutionary trait around assessing the possibility of threats. A hill is not a threat, even when you are as unfit as I am. A tick might be.

So we can still get taken by surprise by a hill. At least I was today. In the end it worked out quite well that I had the place all to myself because at least I did have anyone to witness my huffing and puffing all the way to the top, and waving my arms wildly at several points as I stumbled into some large and very sticky spider’s webs.

When I was done I decided I needed to go get something really unhealthy to eat because according to the weight watchers database I’m losing weight too fast and need to eat more. So I stopped off at the shops and bought myself a 1kg chocolate rabbit. It was only when I got back in the car afterwards and looked into the rear view mirror that I realised I had a streak of dirt all down the side of my neck. How embarrassing. Hopefully no-one in the shop noticed.

After all the walking I am exhausted so I am off to read a book and maybe break the ears off the rabbit.

Source of the spider’s webs

There were loads of these pink flowers everwhere. I suspect they might be a weed

View from the top